With the impacts of climate change and global warming closer to home than ever before, we're pleased to announce that our Marmoleum 2.0mm and 2.5mm are now independently EPD confirmed as CO2 neutral in the cradle to gate stages of the product’s life cycle, without the need for carbon offsetting.

Listed below are the most Frequently Asked Questions.

We consider Marmoleum 2.0mm and 2.5mm to be a balanced product in the cradle to gate stages in the products life cycle in terms of positive and negative CO2 flows:

On the plus side we have the contribution of our natural raw materials, such as jute, flax plant, gum rosin, tall oil and wood flour. As these plants grow they absorb and therefore remove, through the process of photosynthesis, large amounts of CO2 from the atmosphere.

These positive flows are balanced out by the transportation of these materials (and others) and the production of the product.

Forbo has minimised its impact by investing in modern and efficient manufacturing facilities alongside the use of renewable electricity. We also benefit from improvements made by the supply chain, who provide us with raw materials.

An independent third party EPD shows us that Marmoleum 2.0mm and 2.5mm is CO2 neutral in the cradle to gate stages of the product's life cycle, without the need for carbon offsetting. 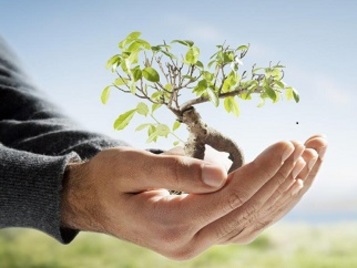 Where do I find this information in the EPD?

This means that per m2 Marmoleum 2.5mm the product has absorbed 4 grams more CO2 than has been emitted during this phase of the life cycle.

If you are interested in the impacts over a 1 year cycle then the Global Warming Potential (GWP) figures can be obtained in table 3.

EPD’s use information from the LCA and the Impacts they measure.

Are there other business or products that are CO2 (Carbon) neutral?

There are an ever-increasing number of companies who are striving to become carbon neutral and some household names have achieved this - Marks & Spencer, Avis and Google for example. This is achieved through good management practice. First step is to measure the size of your carbon footprint and then implement strategies to deliver for example, reductions in energy consumption or use of renewable energy and investment in carbon offsetting schemes.

Offsetting normally has an important role to play in helping to deliver carbon neutrality. Forbo's Marmoleum 2.0mm and 2.5mm is independently EPD confirmed as CO2 neutral in the cradle to gate stages in the product's life cycle, without the need for carbon offsetting.

What is the difference between CO2 neutral product and CO2 offset?

A CO2 neutral product is produced in such a way that the result in terms of CO2 emissions does not add any additional CO2 to the environment. In the case of Marmoleum 2.5mm, and some other products made from natural raw materials that embed (absorb) CO2. It is a combination of the ‘surplus’ of CO2 in the materials and the ‘emission’ of CO2 during production which evens out to zero.

CO2 offsets are simply a way of offsetting the CO2 generated in the production / life of a product. We have spoken about how natural ingredients absorb CO2 and the positive effect this has but what if your product has no natural ingredients – then you can contribute through participating in carbon offset schemes. The more credible schemes will be third party verified.

For more information on carbon offsettingVisit

We are all aware of the growing number and size of extreme weather events that are occurring and the relationship between them and global warming. Carbon offsets simply allow a business to offset the carbon their activity produces by investing in programmes that remove carbon from the atmosphere.

In other words you end up in a carbon neutral position.

For many business, participating in carbon offsetting schemes is an effective way to reduce their carbon footprint. Stricter and binding targets (Paris Agreement for example) and the increasing realisation that climate change is happening will likely see more and more businesses and even countries adopt offsetting as one of the solutions.

Whilst we continue to make improvements both internally and through the supply chain it is more than likely that in the future our performance will have to be further enhanced through carbon offsetting.

Carbon neutral was perceived as the goal but it is becoming clearer now that carbon negative may in fact become standard and we are continually working towards that.

However, making a conscious choice for Marmoleum, as it is a genuine CO2 neutral product in the first place, is a good start.

Do I get points for LEED or BREEAM for using a C02 neutral product?

No – credits in both schemes can be earned by having EPD’s but there is currently no credit for having your product CO2 neutral in any of the lifecycle phases or as a whole. If credits were to be attributable in future build schemes then it is possible that these would be based around the use of carbon credits in a whole life situation or that of the building life. Drivers toward this position would be probably be on a global scale, for example, the Paris Agreement and the rising awareness of the UN sustainability goals.

What are governments doing in terms of taking care of climate change?

This varies by country, however, as most nations have signed up to the Paris Agreement they all need to act and they all need to produce a plan that limits temperature rises to 1.5C from its current level. This means we will have to reduce the level of greenhouse gasses such as methane and carbon dioxide (CO2). Most countries have formulated a strategy which over time should lead to reduction of CO2. The big gain in all markets is through so called energy transition, the move from fossil (fuel) resourced energy towards sustainable energy like solar, hydro or wind energy. Legislation and taxation are other strategies through which change will be driven.

The Paris Agreement is comprehensive and has a series of checks and balances included in the agreement document. As such, governments are required to act and are to report on progress. 2030 and 2050 for many countries are defined milestones. Officially we are still in the preparation phase with implementation expected from 2020 onwards.

Is an LCA different to an EPD?

How do you measure envirnomental impacts and what is an LCA?

We do this by undertaking a Life Cycle Analysis (LCA).
An LCA is a method of determining the total environmental impact of a product during its entire lifecycle. A standard LCA will consider the impacts from 5 phases, these are production (including raw material extraction), transport, installation, in use and end of life.

The life-cycle assessment is a complex process and judgements are not exact. For example, people do not always follow the disposal advice from the manufacturer.
Disposal methods may have both drawbacks and benefits. For example, incineration may emit harmful gases into the environment, but the energy released can be used to generate electricity.

At each stage a life-cycle assessment (link to question 10) considers:
• use of raw materials (including water)
• use of energy
• release of waste substances into the environment

What impacts does an LCA measure?

The impacts measured and reported on by Forbo are:

These impact categories are found on the EPD which shows the results but also explains the production process, describes the raw materials, stages of life cycle and impact categories.
Marmoleum 2.5mm EPD download