In close cooperation with the Italian architect and designer Alessandro Mendini we have created 3 unique Marmoleum designs that reflect his pointillist style: Proust, Harlekino and Plato. The 3 designs are available in a bright, contrasting variant and one of more subdued, greyish tones, both in the same geometric pattern.

"The commission from Forbo Flooring gave me the opportunity to design a Proust floor in Marmoleum. The variations are keyed in such a way that they are easily recognisable and can be used one after the other."

This sample has been added to your cart. Alessandro Mendini was born in Milan in 1931 and passed away in February 2019 at the age of 87 years. He was an architect, artist, designer, theorist and journalist.

In 1959 Mendini graduated as an architect at the Politecnico di Milano. He then worked as a (chief) editor for several trade journals, including Casabella, Modo and Domus.

In 1976 Mendini was one of the first members of the experimental Studio Alchimia. During this period he started to develop his ideas about postmodern design and re-design.

With his brother Francesco, he started Studio Mendini in 1989, which focused on both theory building and design and architecture assignments. For example, the design studio is responsible for the Swatch and Alessi stores and global showrooms from Bisazza.

His many architectural projects include offices, factories, sports centers, metro stations, hotels, museums and municipal buildings in Italy and beyond. In addition to the Groninger Museum in The Netherlands, the Torre Paradiso in Hiroshima is a well-known Mendini building.

Well-known product designs from his hand include the Proust chair, a series of kitchen appliances for Philips by Alessi and corkscrews, glasses and an espresso pot for Alessi. 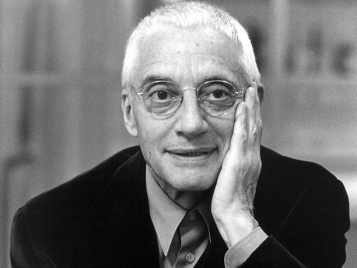 "A product is never mine alone. When I have a good idea, I try to realise it and then choose a company. If it’s a bad company, then the result is a bad product, or no product at all. A strong company, on the other hand, has all the necessary technology and productive capacity at its disposal."

"The commission from Forbo Flooring gave me the opportunity to design a Proust floor in Marmoleum. The variations are keyed in such a way that they are easily recognisable and can be used one after the other – for the floor of a store, for example.

But the effect is much stronger when they are combined in a single space – simultaneously on the floor, the walls and the ceiling. The advantage here is that the walls then function as a Marmoleum showcase and a sort of three-dimensional Marmoleum catalogue." 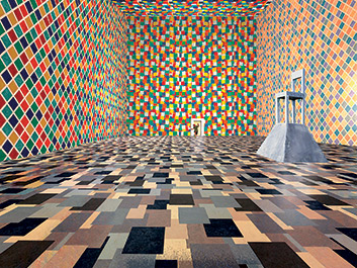 Harlekino – emblematic of Mendini himself – is at the heart of the ‘Marmoleum meets Mendini’ flooring collection. The bright, colorful version refers to a harlequin’s suit, while the softer version has a more classical appearance, which combines wonderfully with marble.

Harlekino is composed of 7 colors. The color of the lines that define the diamond shapes can be repeated in a simple border round the edge of the room. 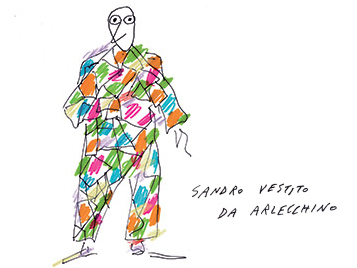 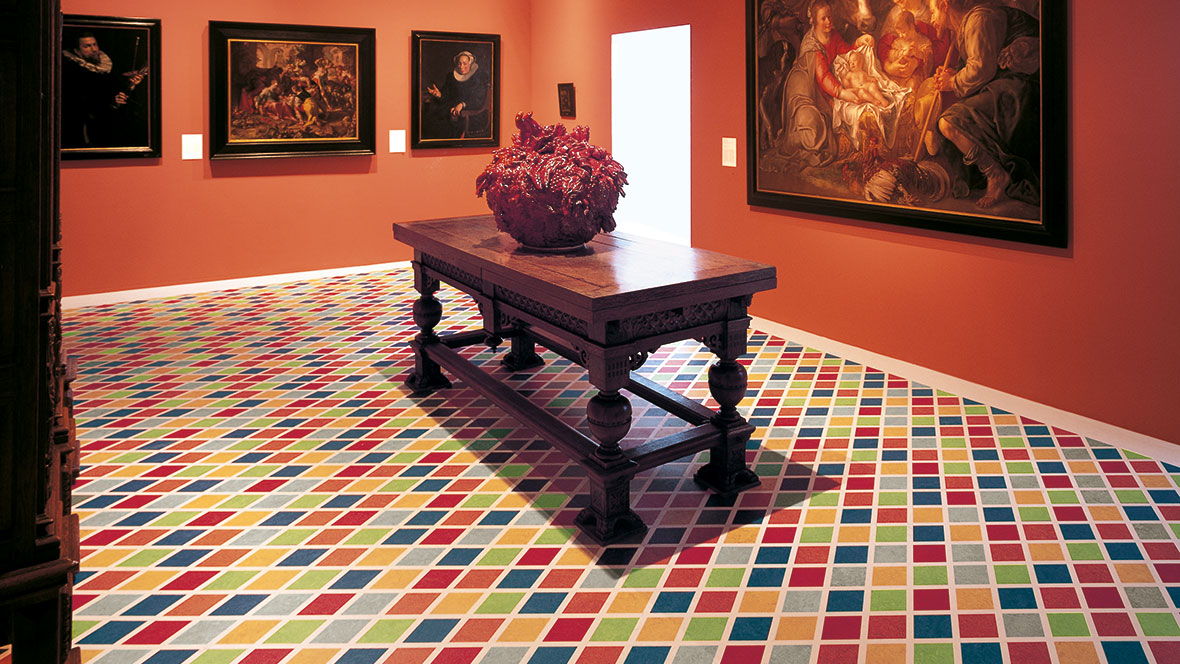 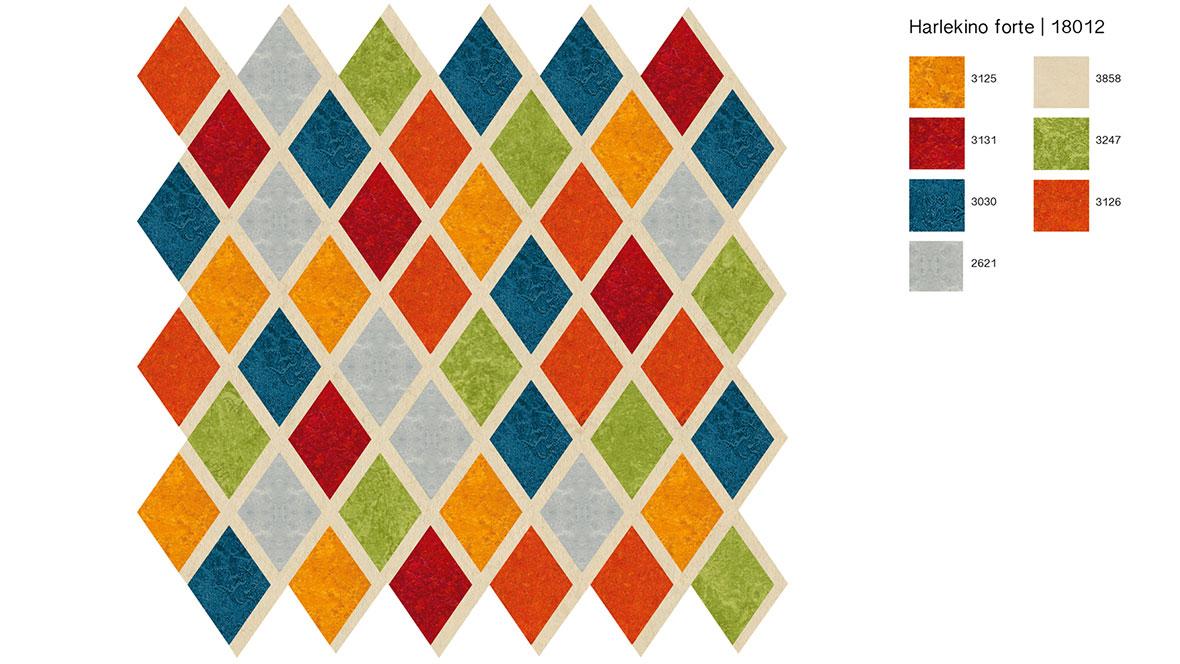 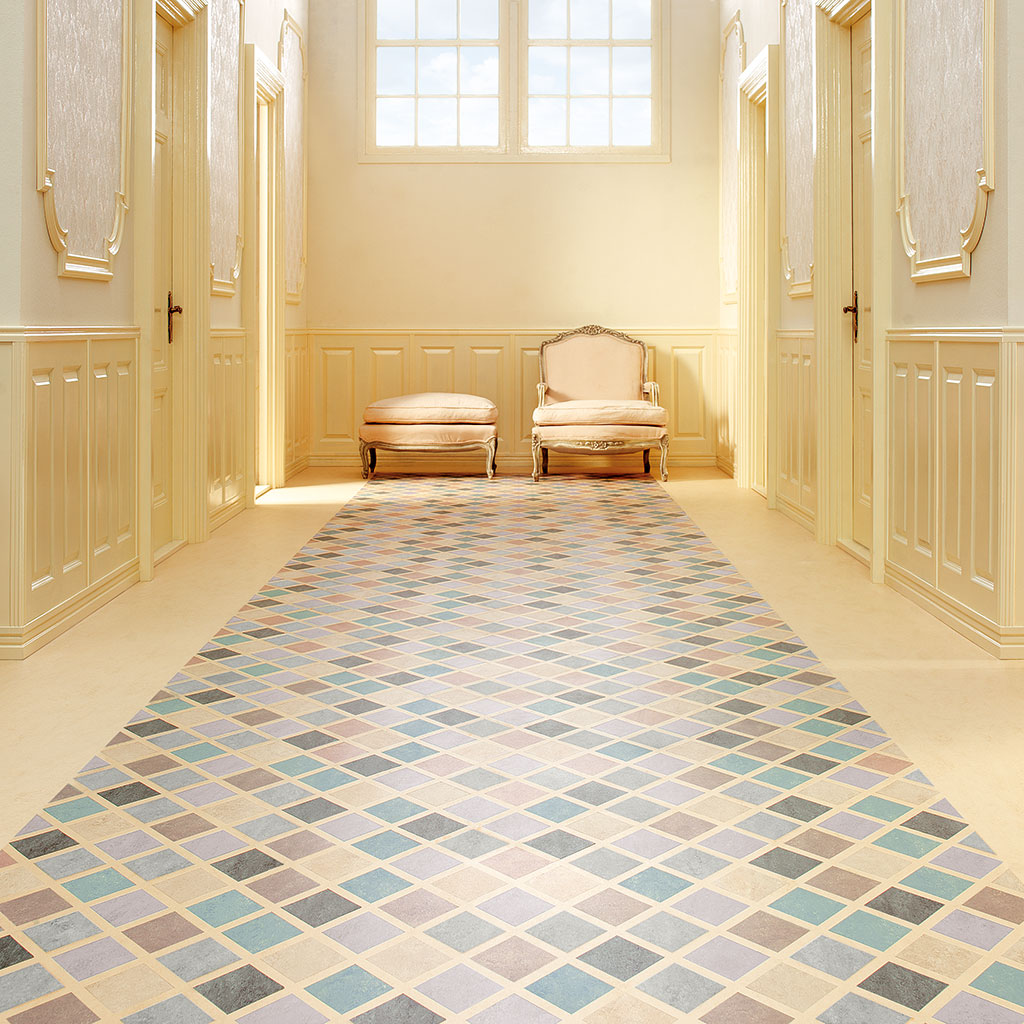 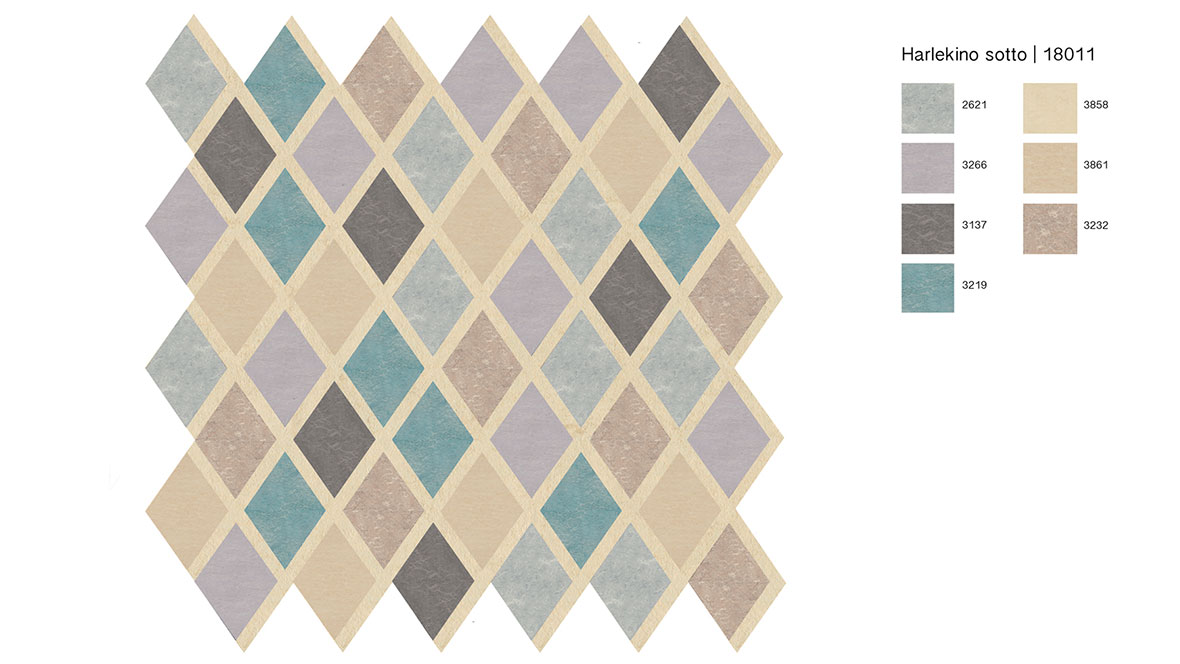 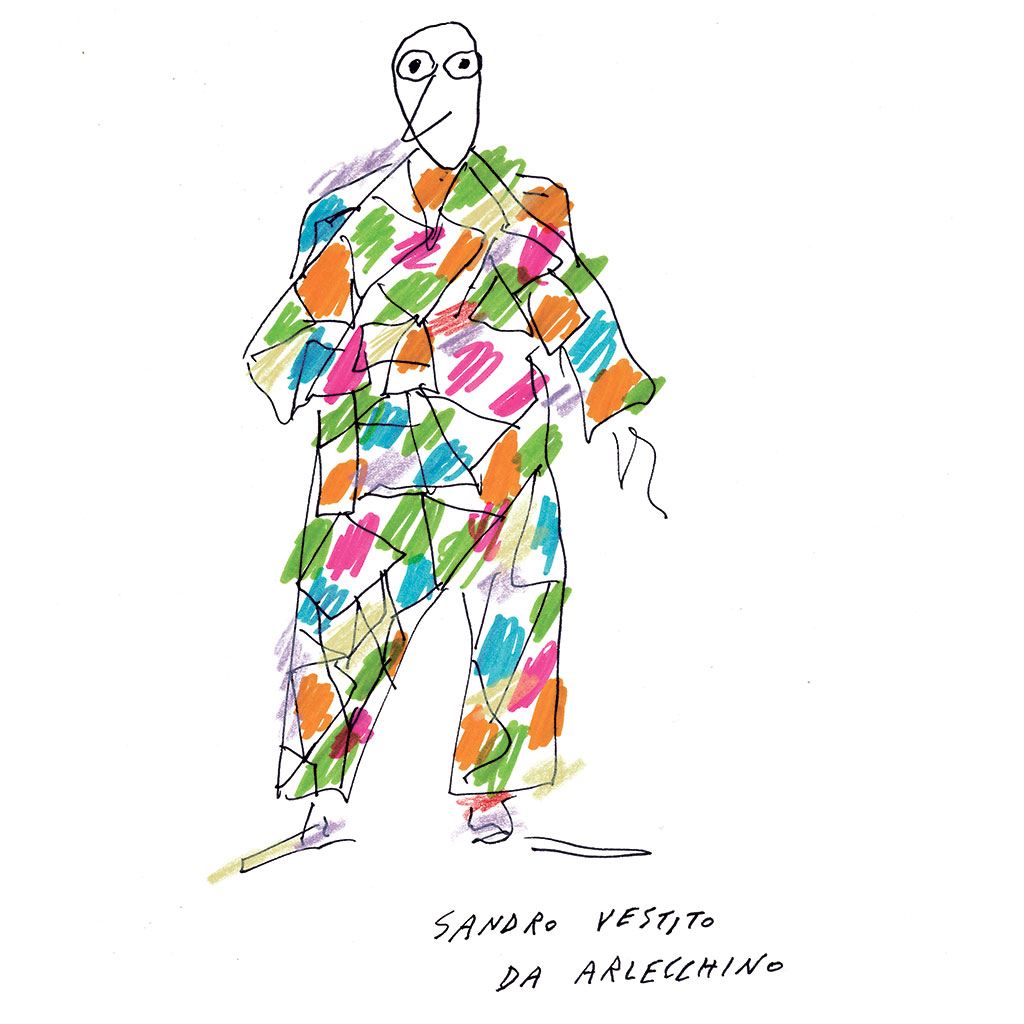 This floor design comes closest to designs made earlier by Mendini such as the Poltrona di Proust. The brush-strokes are clearly visible in the Proust floor, powerfully magnified to a size of about 50 cm. The Proust design contains 7 colors.

As with all Mendini floors, the panels can be connected to create a wall-to-wall design. It’s also possible to lay a panel as if it were a rug, creating a strong accent within a larger uniform area of Marmoleum flooring. 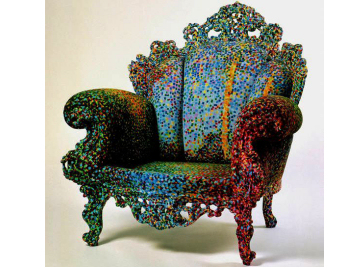 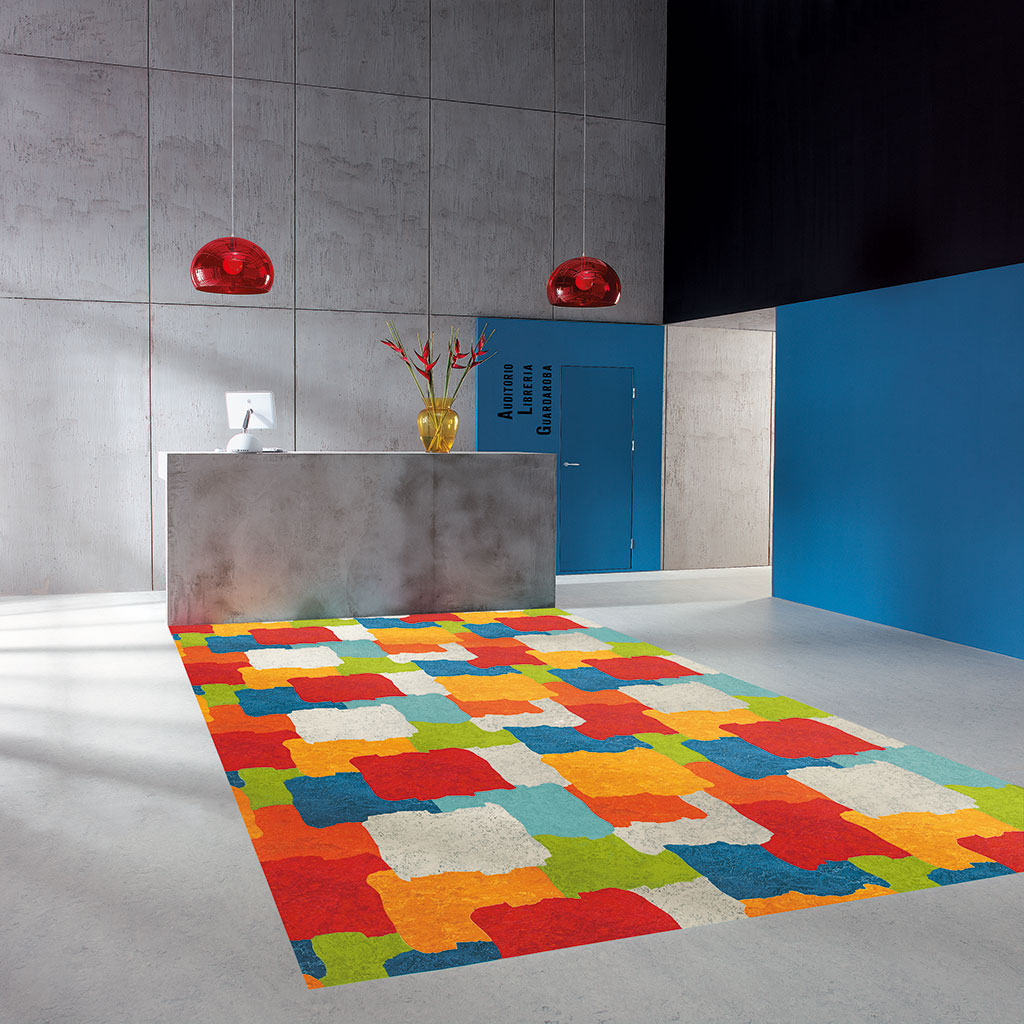 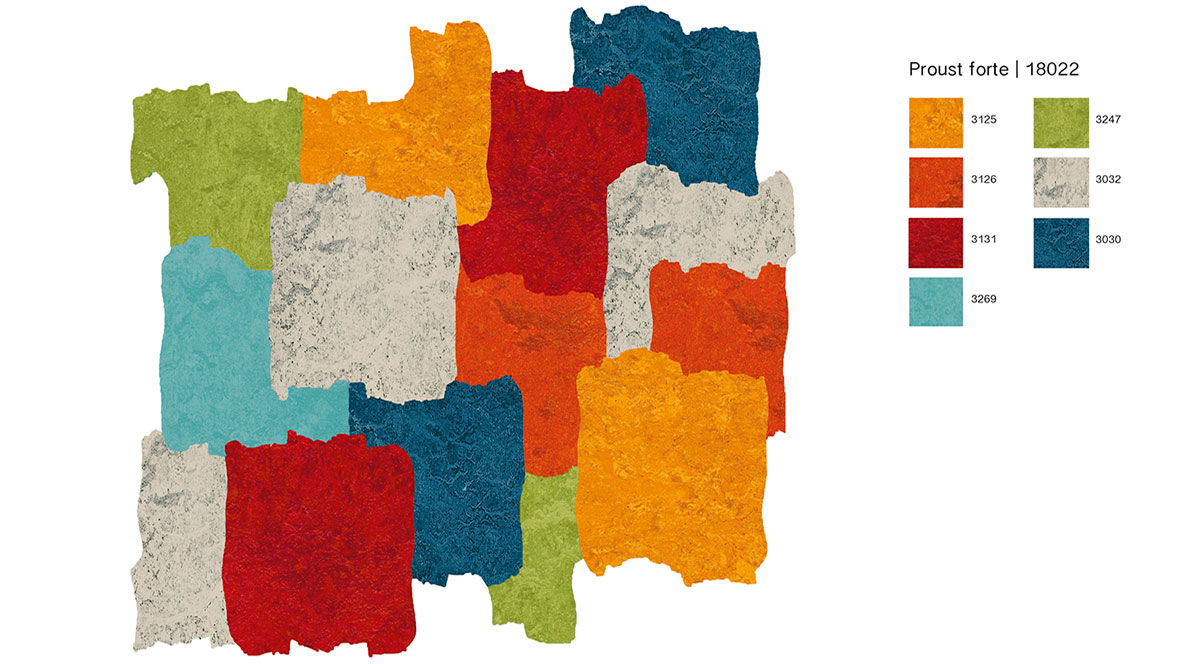 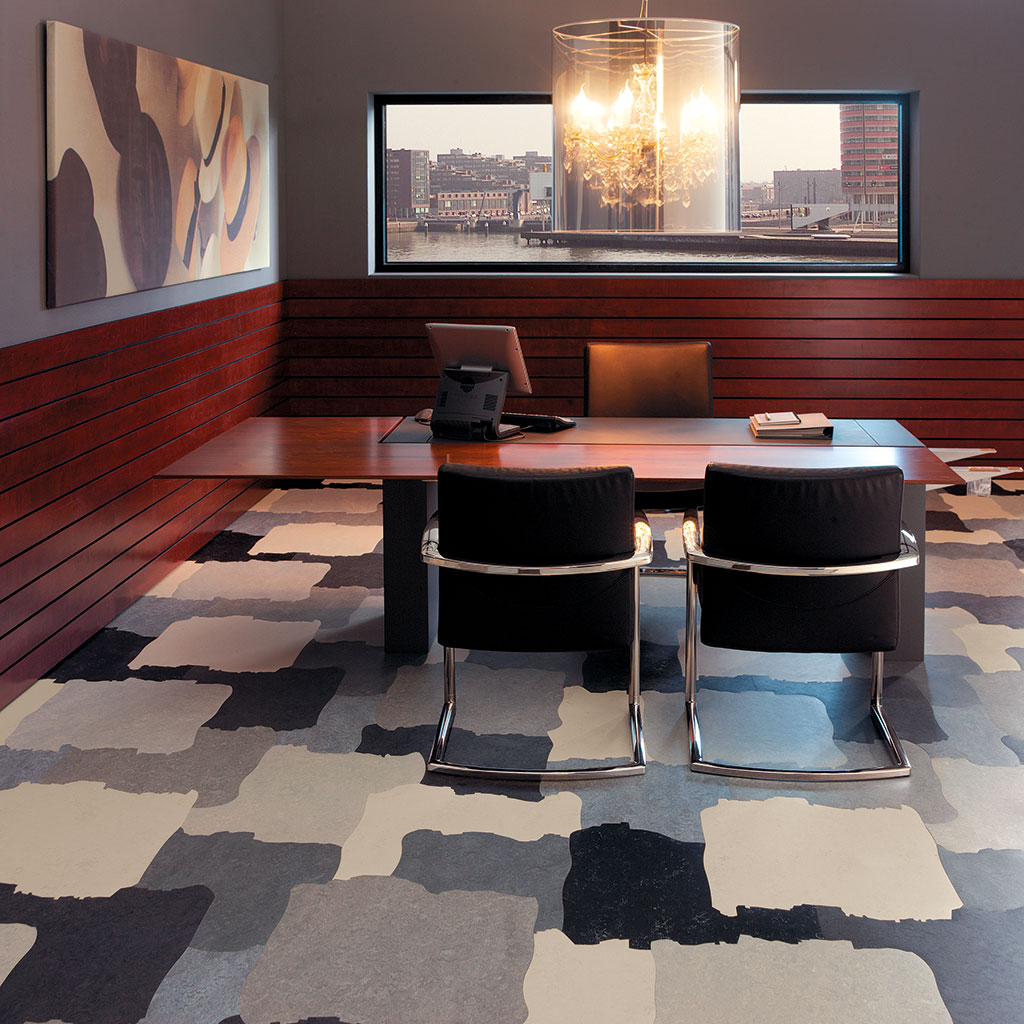 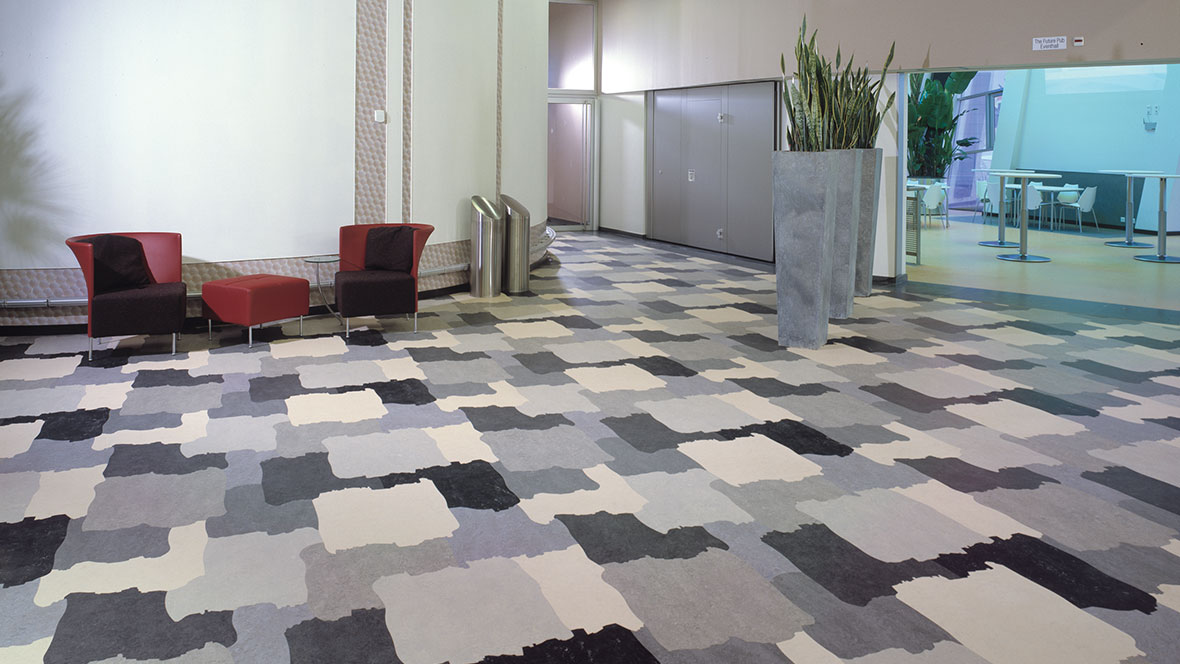 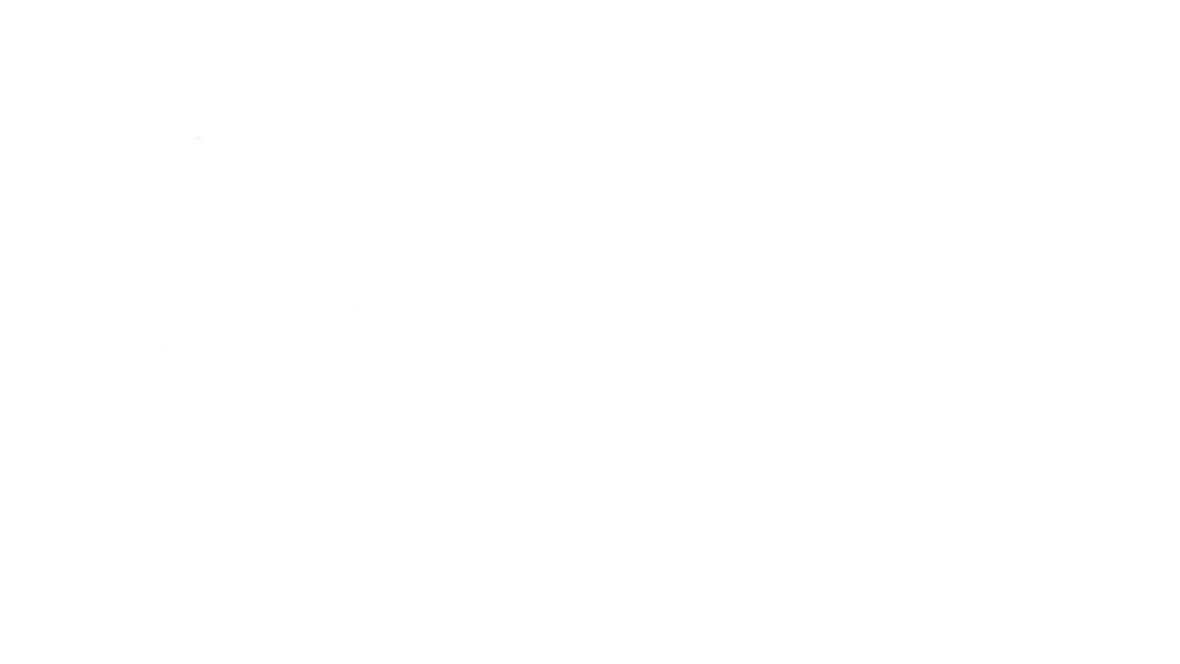 The Plato design reflects the principles of pointillism, in which the brush-strokes are abstracted into square shapes overlaid in a variety of ways. Plato is available in a brightly coloured version (in 8 Marmoleum colours) and one based on softer shades.

With each order Mendini’s signature is delivered on a strip of Marmoleum, ready to be incorporated in the overall design. 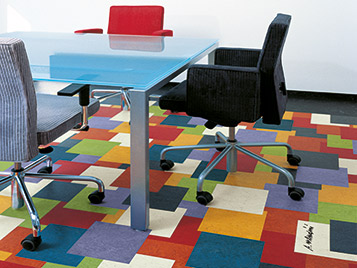 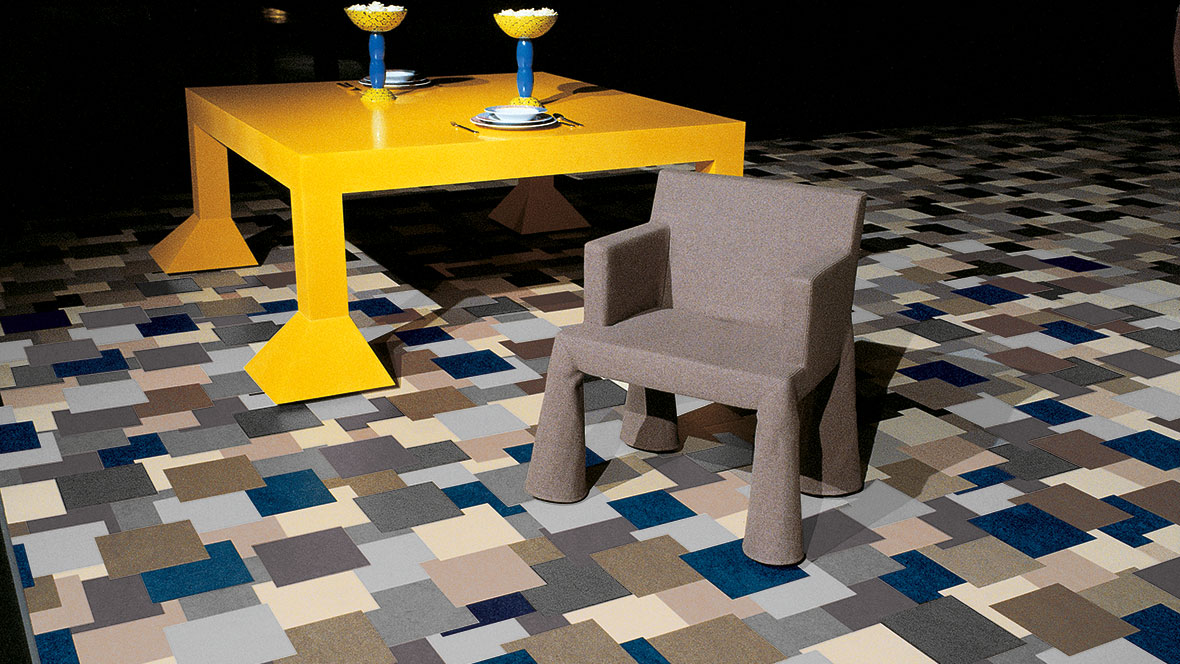 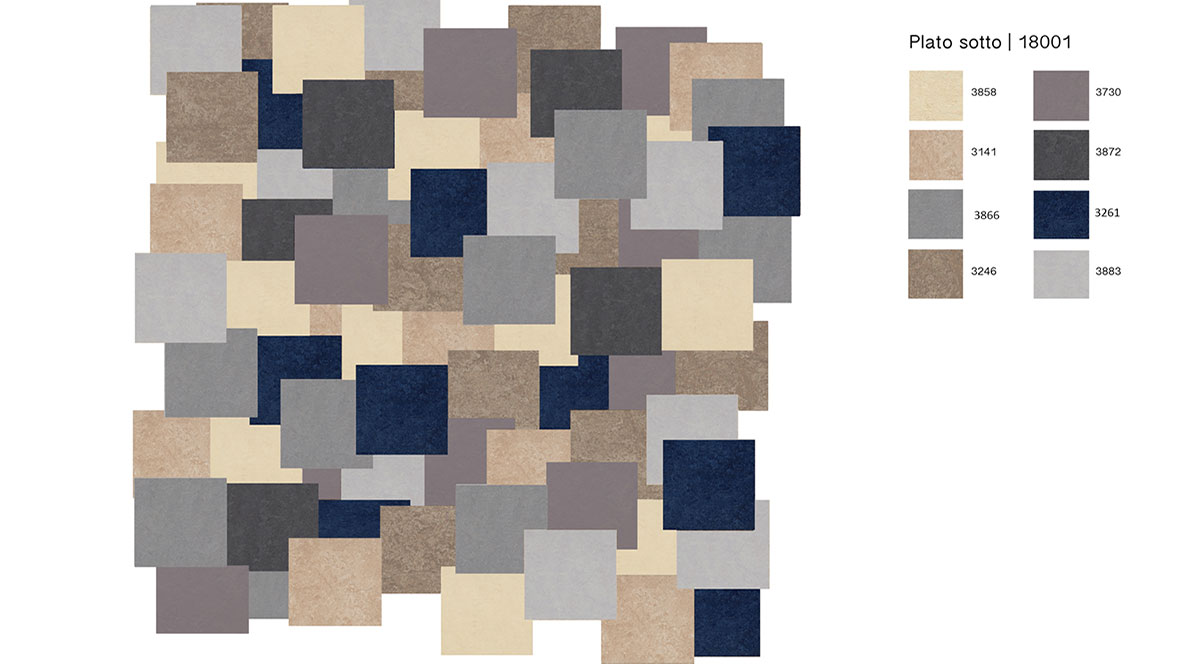 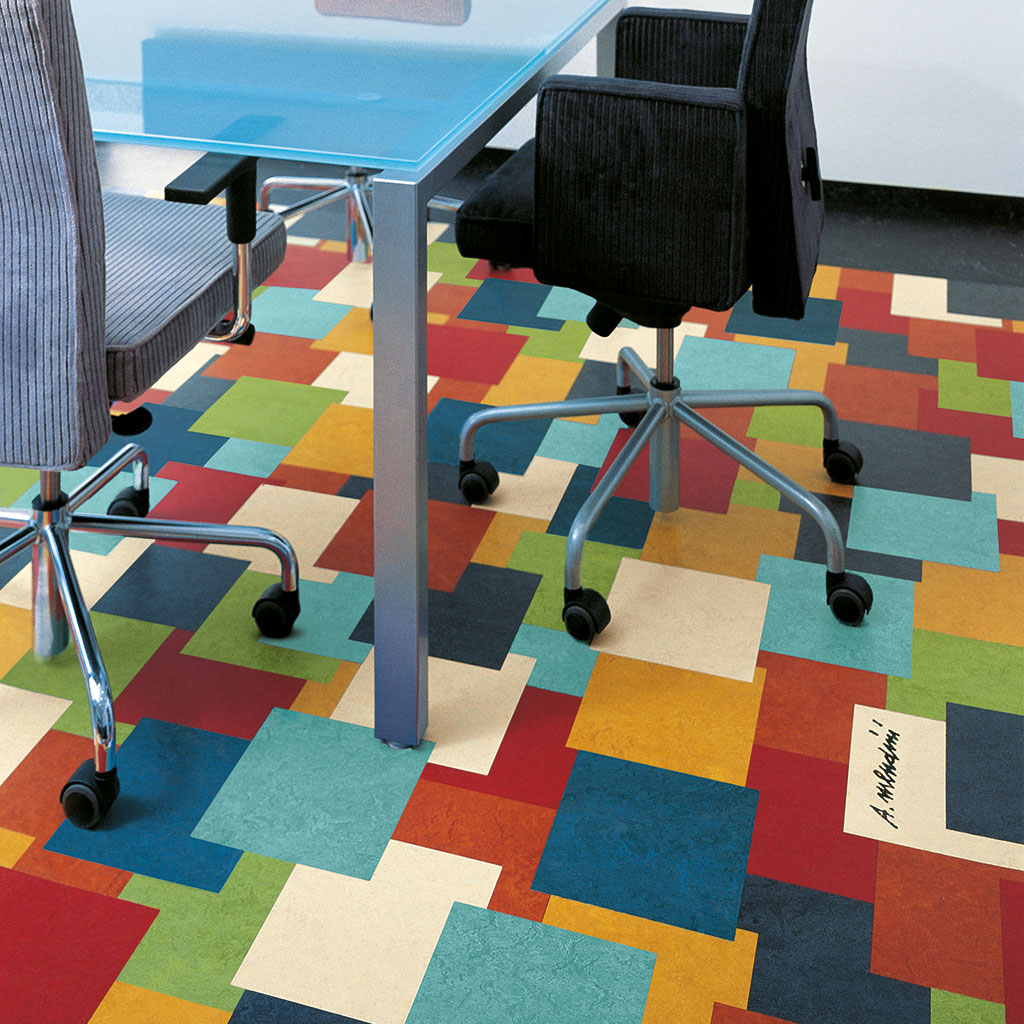 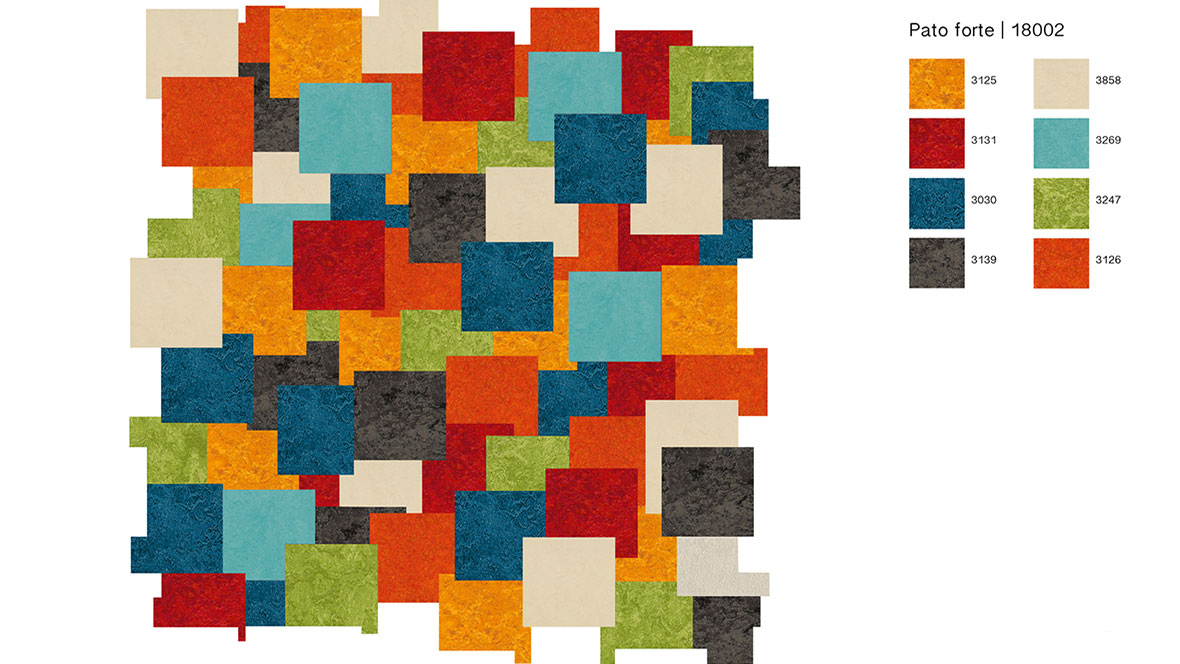 Forbo Marmoleum floors are easy to clean and maintain, thanks to Topshield2, an innovative and durable factory finish which should not be removed. 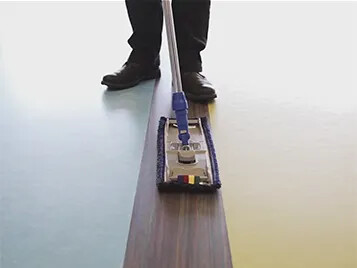